In simpler times, CPUs were named based on their core power and their clock speeds, making it easy to identify which was the best performing CPU. Now, the name of the game has changed, and Intel and AMD have changed their naming schemes with it. Both of these companies designed clever and tricky name schemes for their CPUs, making it more difficult to determine which CPU is better than another.

When we talk about CPUs, there are several distinct differences that make each chip unique. First is the architecture. This is the way in which the chip was actually designed and constructed, and usually falls in line with the generation of the CPU chip. The second piece is the name of the CPU line, or what end of the market these chips belong in. Both of these pieces are very important to keep in mind when talking about naming CPUs.

Let’s start with AMD. AMD currently has two unique kinds of processing chips – APUs and CPUs. Most already know that a CPU is the processing unit for your computer, the “brains” in a sense. An APU, or accelerated processing unit, is a CPU combined with graphics cards (GPU) in the same component to save space. Within these two categories, AMD has several different lines of chips depending on which end of the market you are looking at. When comparing apples to apples, APUs are going to perform better on smaller systems where less power and graphics are required, like a laptop. CPUs on the other hand can handle bigger builds and better high-end gaming than an APU will. AMD also created names for these specific lines to help distinguish their target market and set price points accordingly. The Sempron series is the low end, cost efficient line, while the A Series is the top of the APU performance line. As you move through each line, price and performance increase by bettering the number of cores in the GPU or increasing the performance of CPU. In addition, the clock speeds and amount of cache increase with the line. Within the A Series, there are almost 2 dozen variations of the chips because there is so much flexibility between the CPU and GPU core power. Below is a chart comparing the APU lines and their best uses.

The next category that AMD has is their CPU lines. There are only two of these chip types on the market right now. The first is the Athlon (not to be confused with its APU twin). These chips offer either dual or quad core processors and fall somewhere between the A Series and the FX series in price. The Athlon CPU chips are great for mid-range systems on a budget, but don’t support the full responsibility of high-end gaming just yet. The second line of their CPU series is the FX Series. This series has 8 cores of power and is the fastest and most affordable CPU that AMD offers. Since these chips are so easy to overclock, they are extremely appealing to hard core building enthusiasts. They contain the Bulldozer architecture, using a module system to share resources between CPU cores. The new Zen architecture that is expected to be released in 2017 will improve upon this structure, making AMD’s CPU chips run faster, more efficiently, and with better clock speeds.

Intel began creating CPU chips in 1971, and their lasting success has catapulted them to the forefront of the CPU industry. They currently have 5 separate branded lines of CPUs, like AMD. Intel, however, does not offer APU’s. Instead, they offer an integrated graphics processing unit into most of their CPUs across all brands. 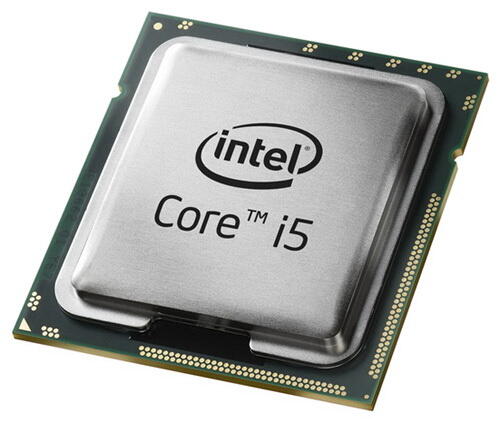 The first CPU brand from Intel is Celeron. These dual-core CPUs don’t have turbo boost or hyper threading, but they do offer a low budget option to owning an Intel processor. The bigger sibling to Celeron is Pentium. The Pentium processors are a little faster than the Celeron, and offer more cache space, but are still at the low end of power when compared to the Core series. Both the Celeron and the Pentium processors are great CPUs for basic operations, and some mild gaming.

The top of their CPU line is the Core series, which is split into 3 different brands (i3, i5, and i7). The processing power of each of these chips can be understood better in the graph below. Keep in mind that within each series, the clock speeds and the processing power goes up, which is where the many different numbers after the Core i3 in the name.

Currently, Intel is on their code name Skylake generation of CPU architecture. The main differences between the Intel architectures is the socket that is used. The Skylake uses the 1151 socket and it is rumored that the new architecture, code named Kaby Lake, will also use the same sockets. Depending on which generation of chip you have, the Celeron and Pentium processors will compete with the Core i3 at a more even level, but this will depend a lot on the generation and the core power.

It’s All About the Name Game

Now that you have some background on the differences between these CPU (and APU) chips, the naming schemes are so much easier to understand. Both Intel and AMD have taken similar strategies to how they name their CPU chips. Both companies use the branded line as the first part of their name. The second part of their name is always a string of numbers. The first number in Intel chips is the generation. This number also helps when determining which architecture a chip has.  AMD, on the other hand, uses the first number to determine how many cores the CPU has, leaving the second number to mark the generation. After the generation is identified in both brands, the numbers that follow are the rank that each company has given the chip within its own generation and family (sometimes referred to as the SKU number). This will help you to differentiate between the chips power and processing capabilities that each product has to offer.

The last thing to a chip name is a letter at the end that represents something unique about the chip. Fortunately, AMD does not have many suffixes for the end of their names. The most commonly used suffix AMD has is K, which is in their A series APUs, and means that the chip can be overclocked. Intel, on the other hand, has many different suffixes that they use with their chips. Intel has different suffixes for their desktops and their mobile machBelow is a quick list of their most commonly used suffixes for their 6th generation Intel Core Processors:

If you are interested in learning more about Intel’s suffixes, click here to see the informative page on their website that explains the differences between the chip families.

Well, there you have it folks! Intel and AMD have tried to stump us all by increasing the difficulty of their naming schemes, but after breaking down the name into its core components, it’s really not that bad. What kind of CPU’s are you running in your rig? Why do you like that CPU? Discussion (friendly and clean) is always encouraged! Share this post on your Facebook and Twitter to keep them informed on this attempted trickery!

Hey Tech World! I'm a marketing intern at AVADirect and I love learning about the newest technology out there! When I am not working, I really love reading, drawing, and most certainly food (of all kinds)!