Windows 10 Pro is designed for small and medium businesses and enables organizations to manage their devices and apps, protect their business data, facilitate remote and mobile scenarios as well as take advantage of the cloud technologies for their organizations. 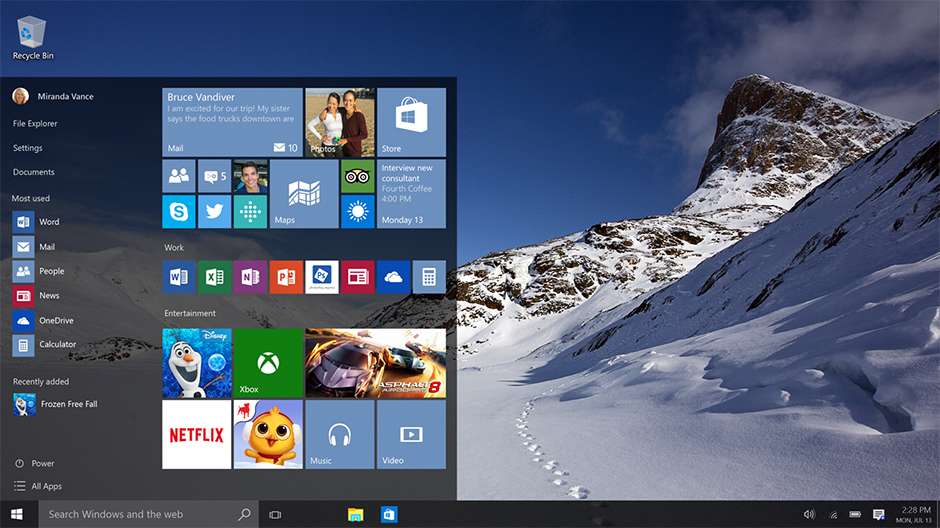 You're already an expert

Windows 10 is friendly and familiar. It’s a lot like Windows 7, including the Start menu, so you’ll already know your way around. 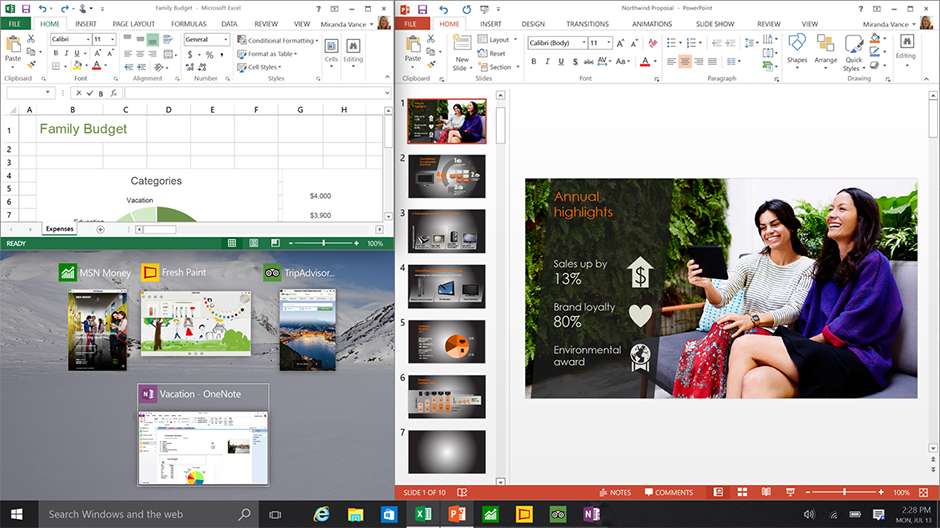 Spend more time getting things done and less time moving things around. Windows 10 enables you to snap up to four things to your desktop at once. Or just use the task view button to see all your apps, docs, and files in a single view. 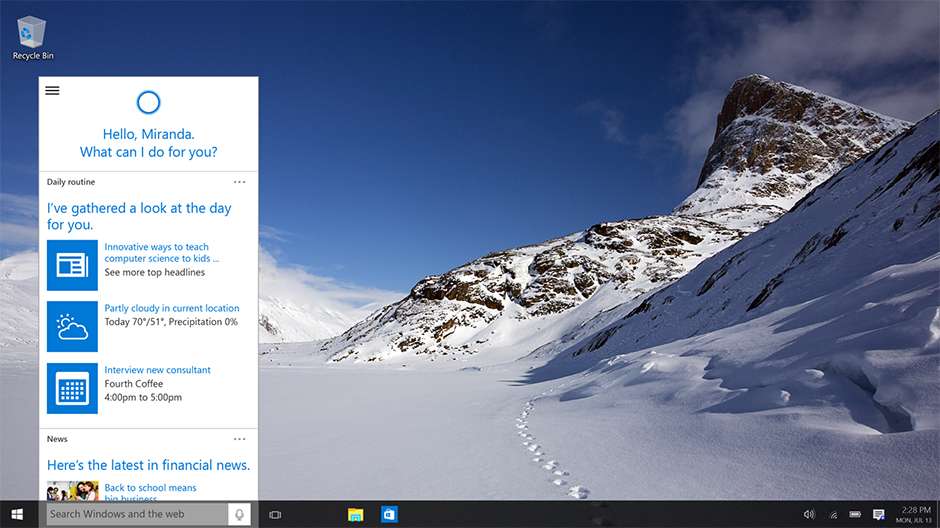 Cortana’s got your back

Cortana, Microsoft’s personal digital assistant, comes to PC and tablet, for the first time with Windows 10.

Cortana learns your preferences to provide relevant recommendations, fast access to information, and important reminders. Interaction is natural and easy via talking or typing, with advanced features to control Cortana for more trustworthiness and transparency. 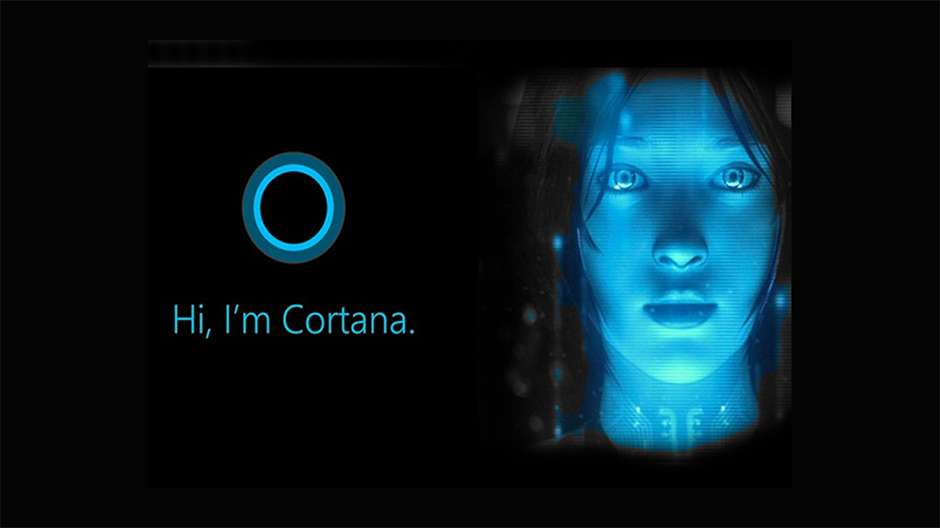 Cortana is your truly personal digital assistant who works across all your devices to help get things done. 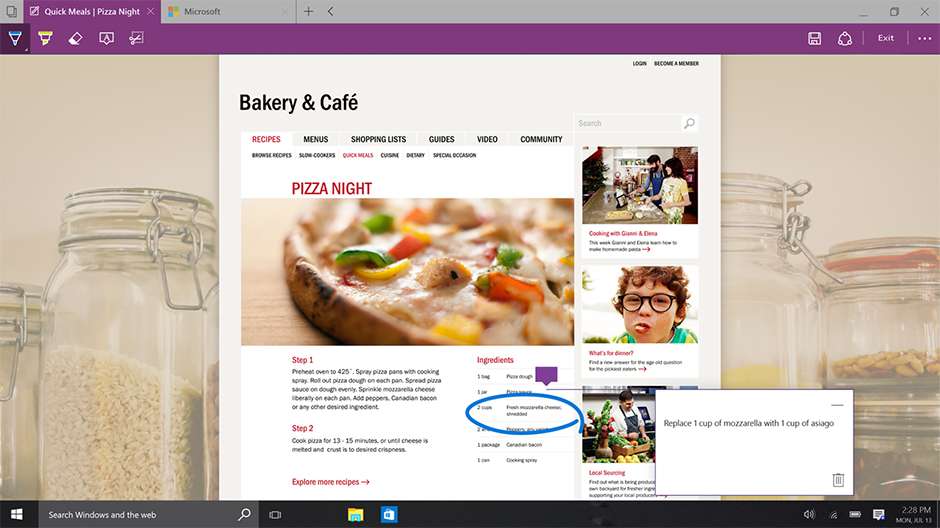 Microsoft Edge is an all-new browser built to deliver a better web experience! You can write directly on webpages from your PC, read articles distraction-free, and save your favorites to read offline later. 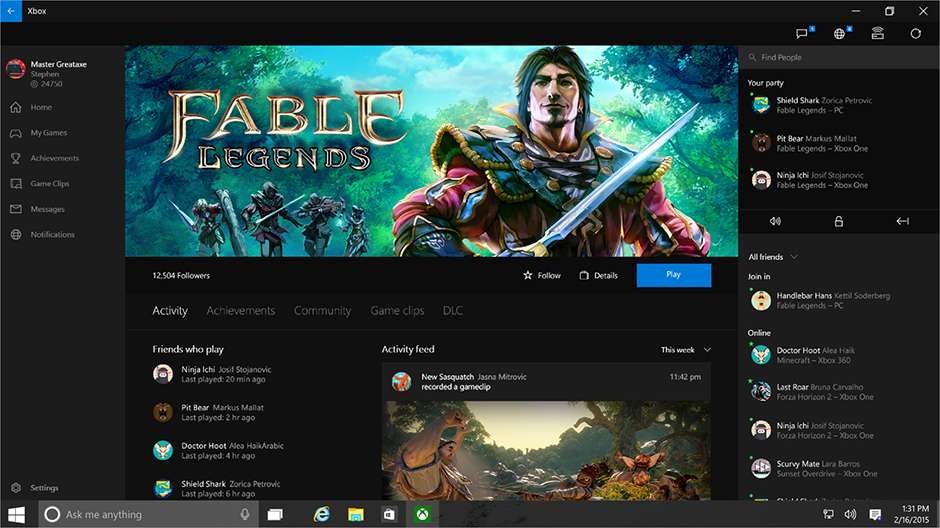 Now, while Xbox is coming to Windows, Windows 10 is also coming to Xbox One. As you know, Xbox One runs on Windows today for its app environment. Later this year we’ll update to Windows 10 to enable seamless interaction with PC gamers and to give developers who want to extend their applications to the television an easy path to do so.

Xbox Live and the new Xbox App bring new game experiences to Windows 10. Xbox on Windows 10 lets gamers access the best of the expansive Xbox Live gaming network on both Windows 10 PCs and Xbox One. Players can capture, edit and share their greatest gaming moments with Game DVR, and play new games with friends across devices. Games developed for DirectX 12 in Windows 10 will see improvements in speed, efficiency and graphics capability. Players will also be able to play games on their PC, streamed directly from their Xbox One consoles to their Windows 10 tablets or PCs, within their home.

The Xbox App. Whether you only game on the PC, the console or both, the Xbox app brings together the most important aspects of your gaming life: Games, Friends, Messages, Activity Feed, your gaming legacy with Achievements, and much more.

Xbox Live and multiplayer across devices. Xbox Live is social, interactive, and seamlessly integrated directly into Windows 10, bringing gamers the experiences they love across devices, like multiplayer gaming on Windows 10 against players on an Xbox One, and messaging and chat with friends. And developers will get full access to the Xbox Live API, making it easier to create more powerful gaming scenarios across devices.

Game Streaming. Thanks to the deep integration of Xbox on Windows 10, games on Xbox One can be streamed through your home network to your Windows 10 PC or tablet, anywhere in your house. Xbox One gamers will now be able to play many of their favorite console games on their PC. And many Xbox One accessories will work interchangeably on the console and PC (with more on the way), so you can customize your experience in whatever way you see fit.

DirectX 12. We’ve enhanced our graphics technology to squeeze every ounce of performance out of your supported hardware and open up a new wave of innovation for high-end graphics. Delivering greater complexity and detail on your current PC, games authored or updated for DirectX 12 are able to run faster and have richer visuals. And this technology is already in the hands of developers today. The engines used to power hundreds of games are implementing DirectX 12, including Unreal Engine 4 from Epic and, as we announced today, Unity.

Game DVR. On Xbox One, one of the most popular features used by gamers is Game DVR, which gives simple access to recording, editing, and sharing out your most epic gaming moments. It’s not easy or consistent to do that for PC games today. We’re bringing this beloved feature to Windows 10, now accessible by simply pressing Windows+G. With the games you love playing – whether on Xbox Live, Steam, or other services – you can record, edit, and share game clips with all your social networks.

Fable Legends. Today we announced that we are bringing Fable Legends to Windows 10 PCs, day-and-date with the Xbox One version in 2015. This means Fable fans running Windows 10 will be able to play against their fellow gamers on Xbox One. It’s the same game, in the same world, on the same map. Fable Legends is just the first of the major game franchises from Microsoft Studios coming to Windows 10 and we will have more to share in the coming months. 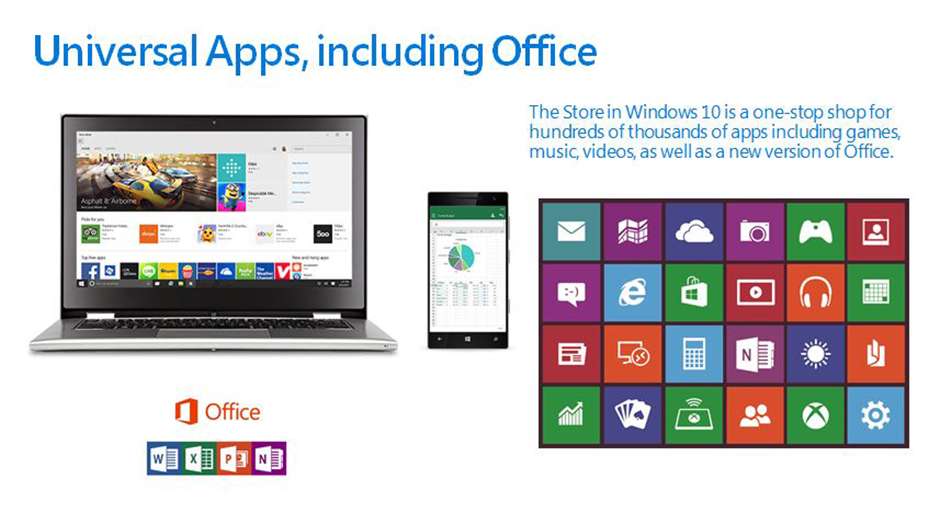 Office universal apps on Windows 10 offer a consistent, touch-first experience across phone, tablet and PC with new versions of Word, Excel, PowerPoint, OneNote and Outlook. Designed from the ground up to run on Windows, you can easily create and edit Word documents, annotate slides in real-time with new inking features or easily present PowerPoint presentations, and with new touch-first controls in Excel you can create or update spreadsheets without a keyboard or mouse. The next version of the Office desktop suite is also currently in development, more on this in the coming months.

New universal applications will ship with Windows 10, offering innovative new experience applications, consistent across the device continuum, for Photos, Videos, Music, Maps, People & Messaging, and Mail & Calendar. These built-in apps have an updated design that look and feel the same from app to app and device to device. Content is stored and synced through OneDrive, enabling you to start something on one device and continue it on another.

Windows 10 is a game changer for security 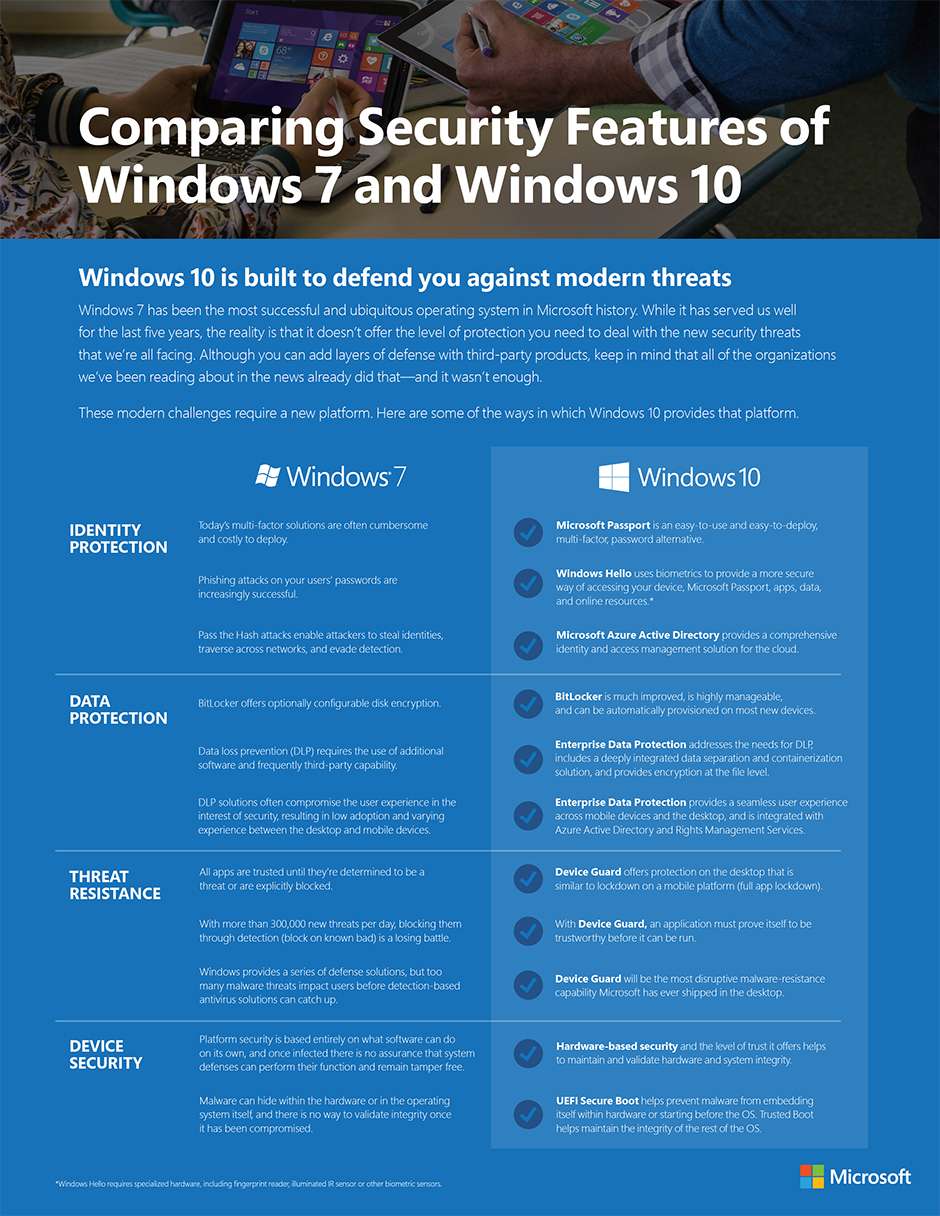 Available - The product is available to purchase, either from our local inventory, or another location. To confirm which, please contact us before placing your order.

LOW STOCK - The product is in stock but has limited availability, i.e. less than 10 items are available. Please note that we do not reserve ordered quantity until payment is fully processed for an order, therefore we cannot guarantee final allocation of ordered quantity if there is a delay in payment processing, due to high risk that the product may become unavailable at that time. Therefore, we recommend to promptly resolve any payment issues, especially if ordered product has Low Stock status.

UNKNOWN  - Availability of the product cannot be determined by our electronic records, though it does not necessarily mean that the product is not available. In such cases we recommend to contact us to get availability information.

OUT OF STOCK - The product is not available at this time and cannot be shipped in timely fashion.

Important Note: When placing orders for bulk quantities we highly recommend to contact us to get precise availability information before placing your order.